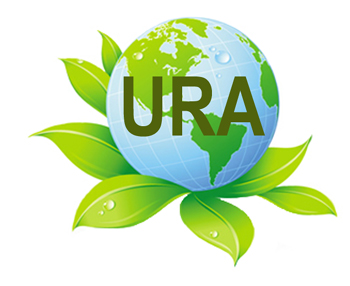 Before we give you more details about the URA, we would like to explain to you the principle and the value of money. When this is clear then we can explain about the way we plan to implement the URA. If you only want to know how the URA works, click on: The way the URA works in practice.

The value of money The only ones that can attribute value to something are ourselves. Something will only have value when it has passed through our hands. Take gold for example. Gold is worth nothing when it is buried in the ground. Only after hours of labour extracting it, does it have value. Through time and labour we produce items for ourselves and each other. Then we express the time and labour by the means of exchange called money.

Example on an (almost) uninhabited island Our current monetary system is based on debt and interest. Without debt creation there would be no money in circulation. In the following simplified story our current system is explained. The island has 10 inhabitants. At a certain moment a banker, who is passing by, introduces money as a very convenient way of exchange to the islanders. He loans 100 units to every person, so in total there will be 1000 units in circulation. For the use of the money he asks an interest of 5 % per year. So at the end of the first year everybody has to pay back 5 units to him.

Because there are only 1000 units in circulation and the banker receives 50 units of interest, at the end of the first year there are only 950 units in circulation left. There is now for the first time a shortage created in the amount of circulating units. To get the total back to 1000 units the banker loans another 50 units. He is thus constantly loaning money. The consequence is that the 10 islanders are constantly taking on more debt upon debt and interest upon interest. This will continue for a while without any problems, but ultimately bubbles and crises, as we now see them, will arise.

The URA The currency that we are going to use in a closed, cooperative circle, will be called URA. One might even expect it to become the Dutch national currency. It is our new gold that will be stable and of fixed value. The URA will in fact be tied to hours and labour (in Dutch – URen en Arbeid = URA). An hour of labour produced today will still be one hour of labour in 10 years time. The URA will therefore have a more fixed value than gold. This is because all investments made under and with the URA will benefit the Real Economy and will yield Financial, Ecological, Emotional and Social (FEES) returns on the capital.

It means investments in raw materials/commodities, fair business practices, biological foods, natural energy resources, real estate, clean water and people. These investments will be beneficial to mankind that will continue to use them. In the first phase, incoming euro`s can be exchanged one for one against URAs. In this way the URA will be invested in fair, sustainable investment programmes that, because of euro inflation, will yield (FEES) return on capital. B of Joy members can pay everywhere in euros and URAs, via internet, mobile phone, debit card or chip card. 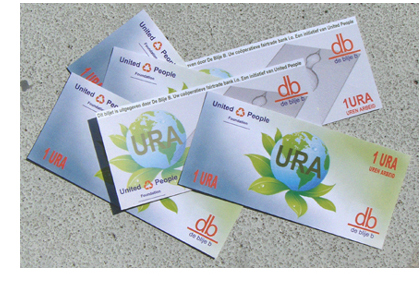 The way the URA works in practice If people so wish, the local currency URA will eventually become a national currency. In practice it means that the URA will pass through different phases of implementation, so it can develop into a fully established currency.

First Phase In the first phase, the euros received will be exchanged without any charge on a one to one basis for URAs. These URAs can be used in the closed cooperative circuit. The euros received will be invested in, among other things, raw materials, natural energy sources, fair and just entrepreneurship and people. At that point a underlying value is created (coverage) for the URAs. All of the circulating URAs in the circuit are therefore covered by an underlying value which, in the end, is related to Hours of Labour (in Dutch URen Arbeid). The entire system of URAs is interest-free.

People find value in things that command mutual trust. This is why we choose to give the URA this underlying value. People will always have a use for these underlying values. And they are interest-free. The sun is the sun and cotton is cotton. This is also why we use the term “fixed value” with respect to the URA. If, in the future, more than 1 euro is needed to obtain 1 URA, then this will be caused by the effects of inflation and interest on the euro. More info.

The members of the closed cooperative circuit will exchange their products and services directly, or otherwise via a business directory, Marketplace and purchasing collective. Through a central administration system all URAs will be credited and debited. Members can also offer the supply and demand of their products outside the closed circuit. This gives the URA extra publicity and the members generate more turnover.

Second phase As the turnover from euros to URAs increases, so will the collective investment programmes of the underlying valuables grow. The basket of investments in raw materials, natural energy sources, just and fair entrepreneurship and people not only has a stable value, but will also produce returns. For the URA that is phase 2. The value of the URA will rise against the euro. At that point the one to one exchange rate between euros and URA will be released. From that point onwards there will be “real time” exchange rates calculated, on the grounds of the basket of underlying value against the euro. The advantages are:

• When making digital payments in euros there will be increasingly less URAs debited;
• The euros, created from thin air and based on debt, will obtain some real value via the URA.

Third phase The moment the euro falls into hyperinflation, or a total crash, the URA will be fully independent of the euro and we will enter phase 3. Money creation can then take place on the basis of production (hours of labour) instead of (currently) debt. This can take place within a national cooperative, which operates under full control and management of society itself. More info.

The size and growth of the money stock would be monitored and held in balance in relation to Gross Domestic Product (GDP). In this way, the optimal stock of money needed will be present, as means of exchange for everything that we as a society wish to trade in products and services. Money would be circulated free of interest. We will then make the full transition to a circular economy if that isn’t already the case.

In the Annual General Meeting of the national cooperative, we will redefine the value of URA (hours of labour) in agreement with all members involved. How many URA would a gardener or an airline pilot earn? How much should a garbage collector earn? A doctor? That will be decided together, to achieve a suitable evaluation for the URA value of each profession. When you peel off all layers it comes down to:

The URAs value is based on the production we ourselves deliver in hours and labour. In the 12 points of change: 3, 4, 5, 6 and 11, you can read in a broader context what we will do locally via the cooperative. In addition to a revaluation of hours of labour for each profession, there will also be a general dividing of the yield, (returns on capital) for all the member certificate holders. In this way everybody involved has an interest to see that the cooperative functions optimally in every aspect. The URA is not the ultimate answer, but does in all it’s possibilties, form a bridge towards a new system where cash money again becomes commonplace.

"THE URA PROTECTS CAPITAL AGAINST INFLATION AND YIELDS VARIABLE RETURNS"